Where to find the best cyberware in Cyberpunk 2077

Okay, my fellow players, it’s time to find another “where to find” Cyberpunk 2077 article and this time it’s all about cyberware! As you all (probably) know already, cyberware is a technology that is ingrained in your character and ultimately makes V stronger. Dealing with Militech Agents, Cyberpsychos, and other tough enemies is tough, so having a fully upgraded body comes in handy. With that said, I will show you where and how to get the best cyberware. Cyberpunk 2077, both free and paid.

The Raven Microcyber MK.4 is a legendary operating system cyberware, which will provide the player with 10 base RAM (which is a great upgrade over what you get at the start of Cyberpunk 2077), 8 Buffer Size and 6 Mod slots – which means you can change it.

And if these advantages weren’t enough to convince you, know that using this cyberware increases the time it takes for a netrunner to hack you by 100%. Also, the RAM recovery rate is increased by 6 units every 60 seconds which is really cool.

To get this cyberware, you will need to go to Watson District and find a Ripperdoc in the middle of a market controlled by Tyger Claw. You should be able to access the Ripperdoc easily, as long as you put your weapon away and don’t linger near a Tyger Claw member. The Ripperdoc will have some cyberware for sale, you just need to choose the Raven Microcyber MK.4 and pay 35k.

If you carry a little extra cash, you can also get the Zetatech Berserk MK.5 from the same Ripperdoc for a little over 43k. This Zetatech cyberware allows you to activate Berserker Mode, which increases your strength and resilience.

Berserker Mode lets you leap from heights, increases overall damage and armor rating, and even restores 5% of your max health when defeating enemies. This cyberware is a great asset for those who take a more violent approach Cyberpunk 2077. As for me, I like to do things stealthily and with less waste, so I didn’t feel the need to buy it.

Another cyberware that you should get at this Ripperdoc is the subcutaneous armor for your integumentary system. Subcutaneous armor increases your armor value by 200, which means you’ll be much harder to beat. At 14k, it’s an easy buy. 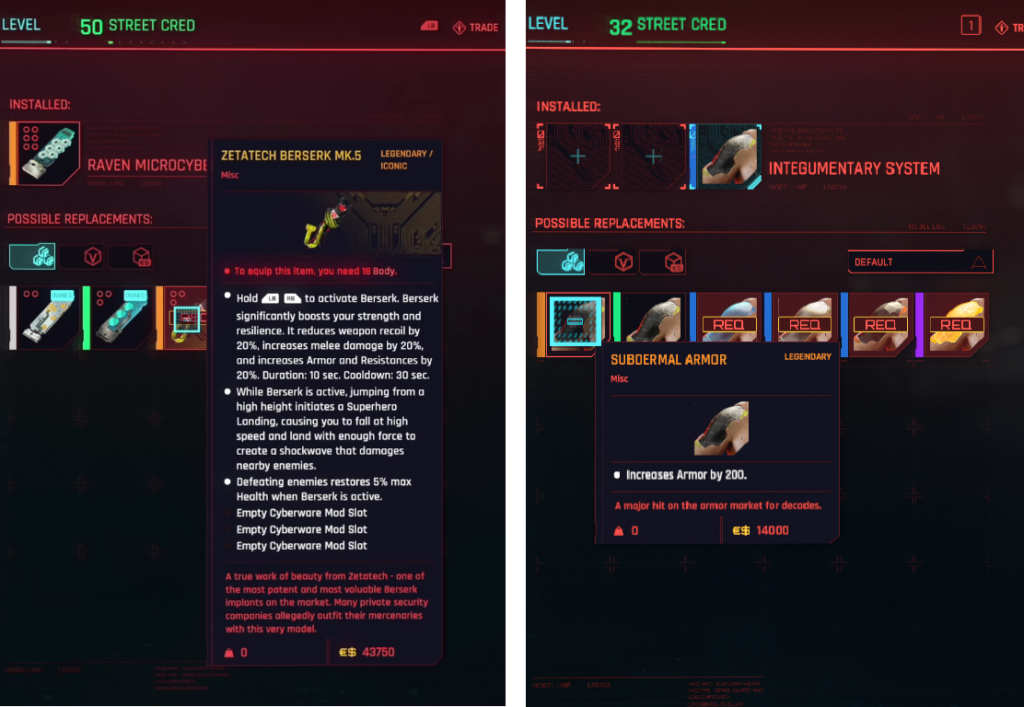 Simply put, the Mantis Blades will turn you into a living weapon and you can wreak havoc anywhere you go, as the blades deal 191-234 damage, plus 103-126 physical damage, plus a 20% chance to bleed. And it’s a very fast weapon!

This legendary Cyberpunk 2077 This article is located near the Night City Center for Behavioral Health. Once you’ve spotted the Behavior Center, just head to the path to the left of the building in the yellow doors. I advise you to squat for this part, as there is a tough Cyberpsycho inside. On the right, near a wall, you will find a holster and a corpse. On the case you will find the Mantis blade. All you have to do next is go to a Ripperdoc and install them.

So if you are an unlucky guy or girl who dies often Cyberpunk 2077, then you might want to consider purchasing this cyberware. The Second Heart is legendary cyberware that, in simple terms, gives you a second life. When your health drops to zero that is, you die, you will get 100% health restoration. Hurray the immortals!

The only two prerequisites for this cyberware are that you will need 16 Body to be able to use it, and you need 49 street cred.

To get the Second Heart, you need to find a Ripperdoc on the west side of the Heywood district and buy it for 42k.

In the same Ripperdoc in Heywood, you can get Syn Lungs which increase Regen Stamina by 25%. It’s a pretty cool feature, especially for melee weapon users.

Last on my list of the best cyberware in Cyberpunk 2077 is the Monowire. The Monowire is legendary cyberware that lets you take on the role of Indiana Jones… well, not really, but the monowire can be used as a whip against your enemies, so it’s pretty close. And if you’re looking for a particularly gory way to kill your enemies, be aware that most of the time using the whip will maim your target.

To find the Monowire, you will need to go to the Watson district and find the Pharmaceuticals store. Face this store and head left. You’ll find a Stephenson Technologies garage, and it should be open.

Head inside and you’ll find the Monowire in a holster. Go to your favorite Ripperdoc and install it. Keep in mind that you can install the Mantis or Monowire blades – they cannot be installed together.