The best Jungler items to buy first in Pokemon Unite

Buying held items is important in Pokemon Unite, but it’s not always clear what items you need to buy for the jungler role. Items can turn a game in your favor and allow you to do things you normally can’t. I’ll go over which items you should buy first and what to consider before buying each item.

The Muscle Band is a good item to improve the power of any Pokémon. Here’s how it works:

“When Basic Attacks hit, damage is increased by 1/2/3% of the opposing Pokemon’s remaining HP.”

The Muscle Band can be used for physical attackers and special attackers, making it a versatile item. The added effect can give you the extra damage you need to win a fight. 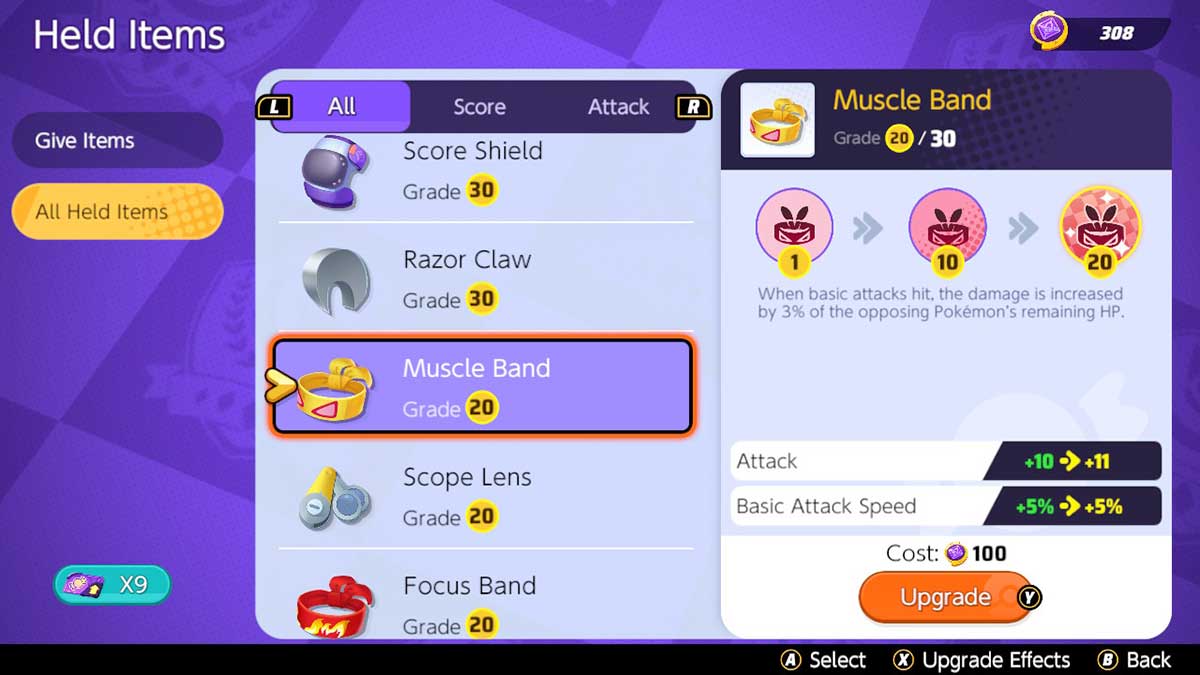 “Increases critical hit damage from basic attacks. The higher the Pokémon’s Attack, the greater the damage.

You can tell if the Pokemon you want to play is an attacker or a special attacker by looking at it in the Pokemon menu. The game will say Attack or Sp. Atk under the Pokémon’s difficulty level. The range lens can be combined with other elements that increase your attack, such as attack weight, to improve its potency. 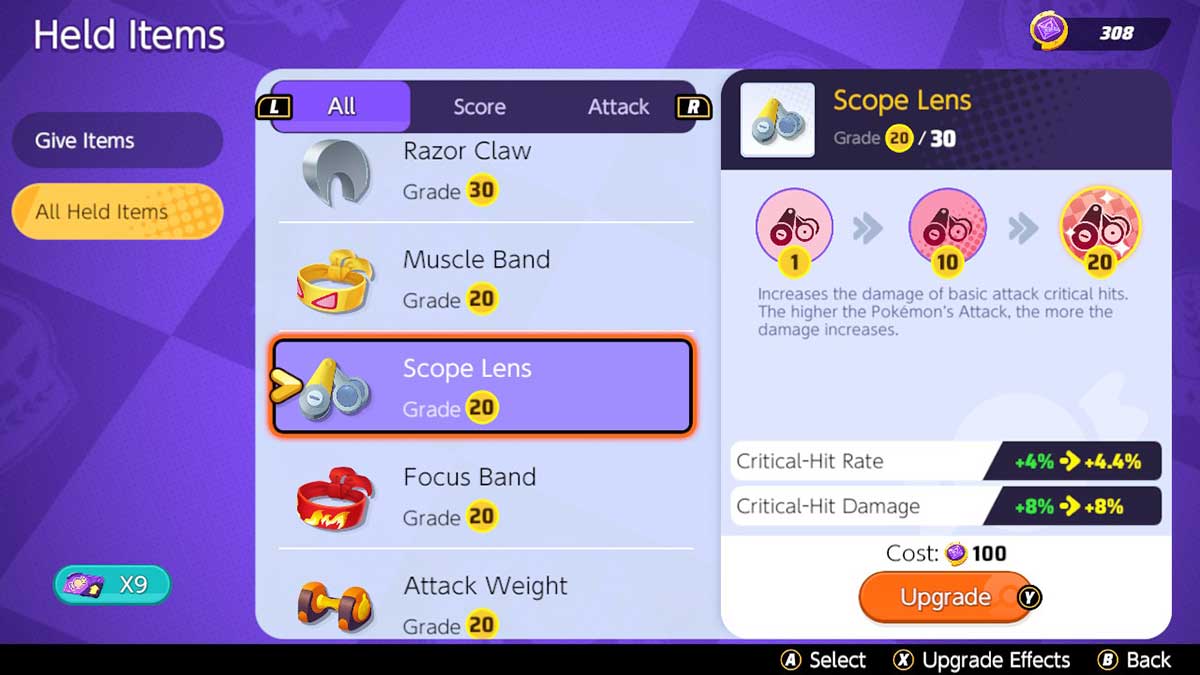 Choice Specs is the item you want for special attackers, never throw this item at a physical attacker. Here’s how it works:

“Adds a minimum of 40/50/60 damage to moves when hitting. The higher the Pokémon’s Sp. Attk is, the more this extra damage is increased.

This item is great for improving the base power of your abilities, and this extra damage can surprise your opponents. You can further increase the potency of Choice Specs by using it with Sp. Attk Specs and Wise Glasses. This makes for a glass cannon build which is perfect for Pokemon like Gengar. 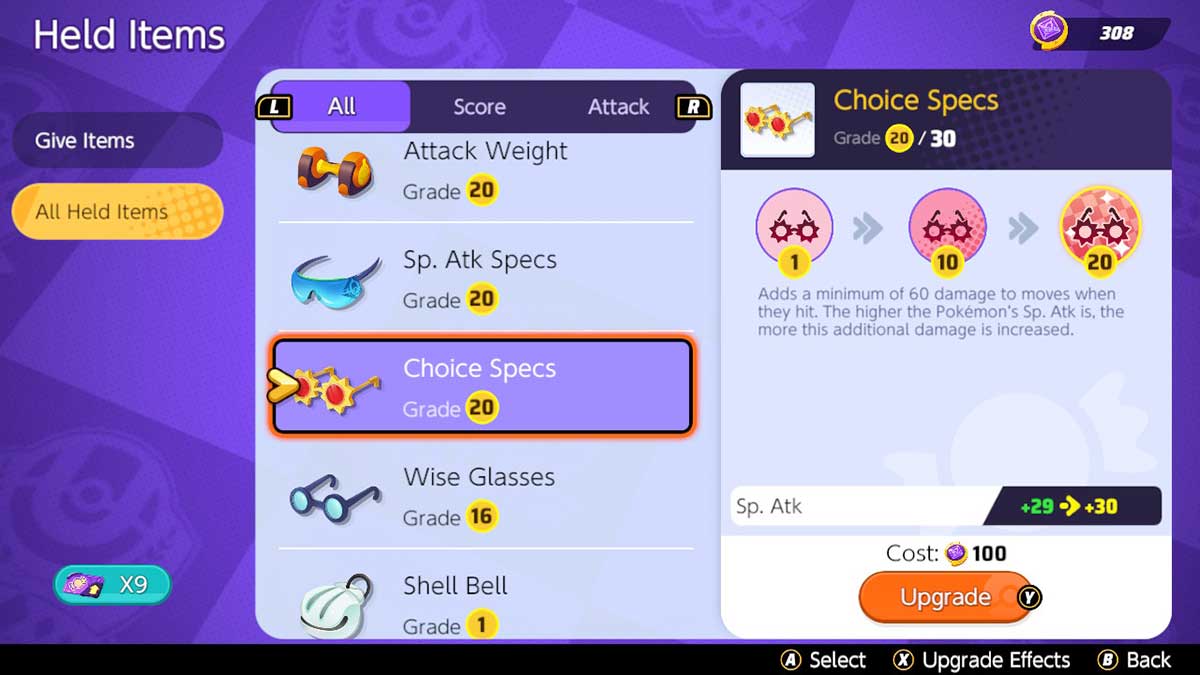 The Focus Band is a defensive item to help counter the squishy nature of certain Pokemon. Here’s how it works:

When playing a Jungler, you can sometimes find yourself in a difficult situation. Maybe the opponent’s save came in or you didn’t deal as much damage as expected. The Focus Band can help save your life in these situations, giving you enough health to run away from opponents and survive. It is also useful in chaotic team fights, the Focus Band can heal you at the right time to survive a deadly attack. This will give you a small window to fight back and hopefully turn the battle in your team’s favor. 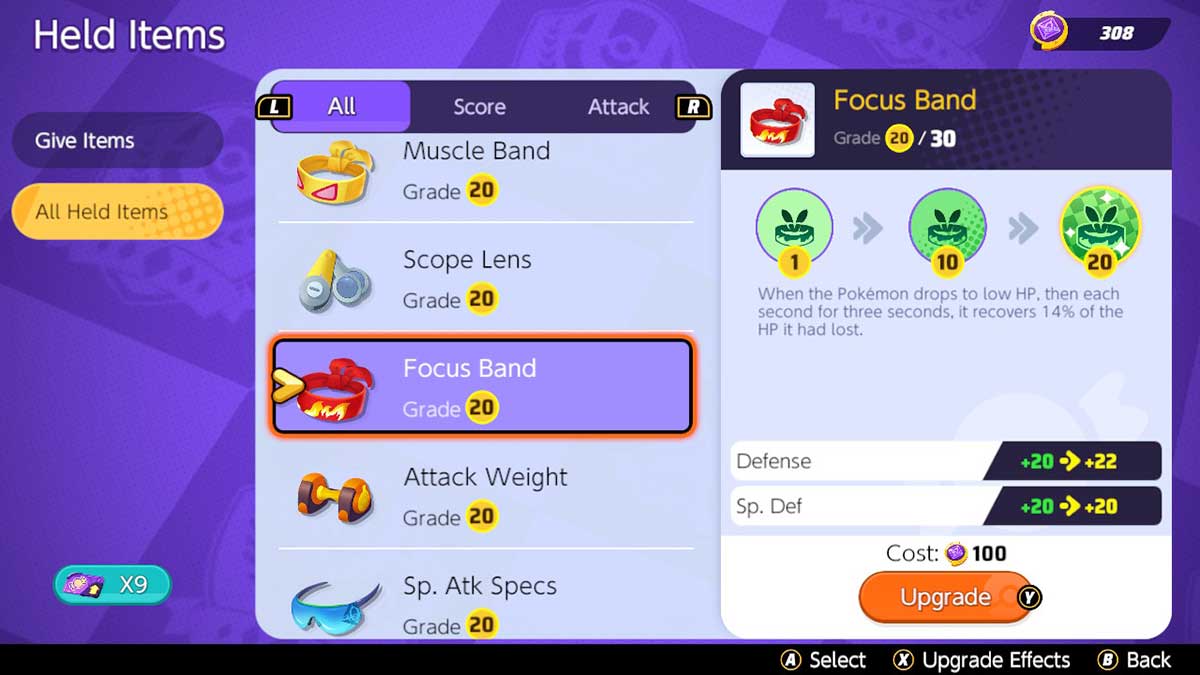 The Buddy Barrier is a defensive item that also benefits your team. Here’s how it works:

“When the Pokémon uses its Unite Move, that Pokémon and the nearby ally Pokémon with the lowest HP each receive a shield equal to 15/20/25% of their max HP.”

Reading its effect, you can imagine the impact this item can have in a team fight. The shield it provides can help your team survive incoming damage. If multiple players on your team have this item, you can stagger each other’s union moves to get another shield. The Buddy Barrier also gives your Unite Move extra utility, giving you the flexibility to use your Unite offensively or defensively. 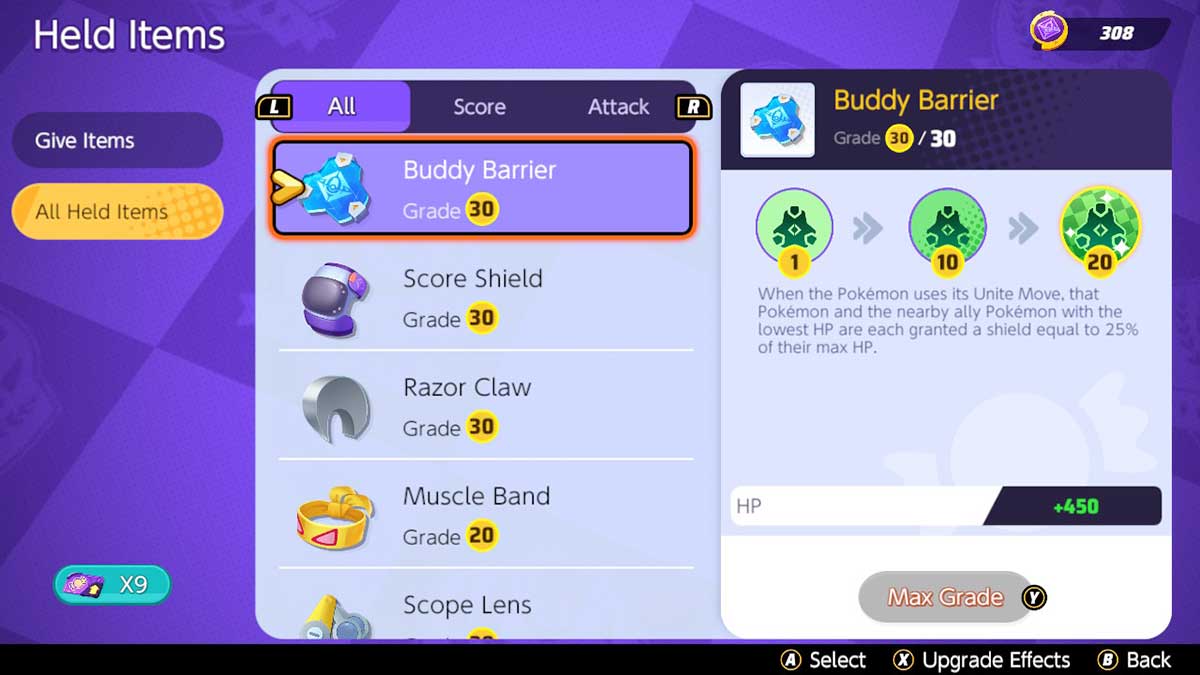 The Razor Claw is an offensive item reserved for physical melee attackers. Here’s how it works:

“After the Pokemon uses a move, a minimum of 10/15/20 damage is added to its next basic attack. The higher the Pokémon’s attack, the more this extra damage is increased. When this item is held by a Melee Pokemon, this extra damage also decreases the opposing Pokemon’s Movement Speed ​​for a short time.

Having the ability to slow down an opponent you’re attacking is strong, especially for melee Pokemon. With the extra damage from Razor Claw and any other items you might have, you can easily take out a player who is out of position. 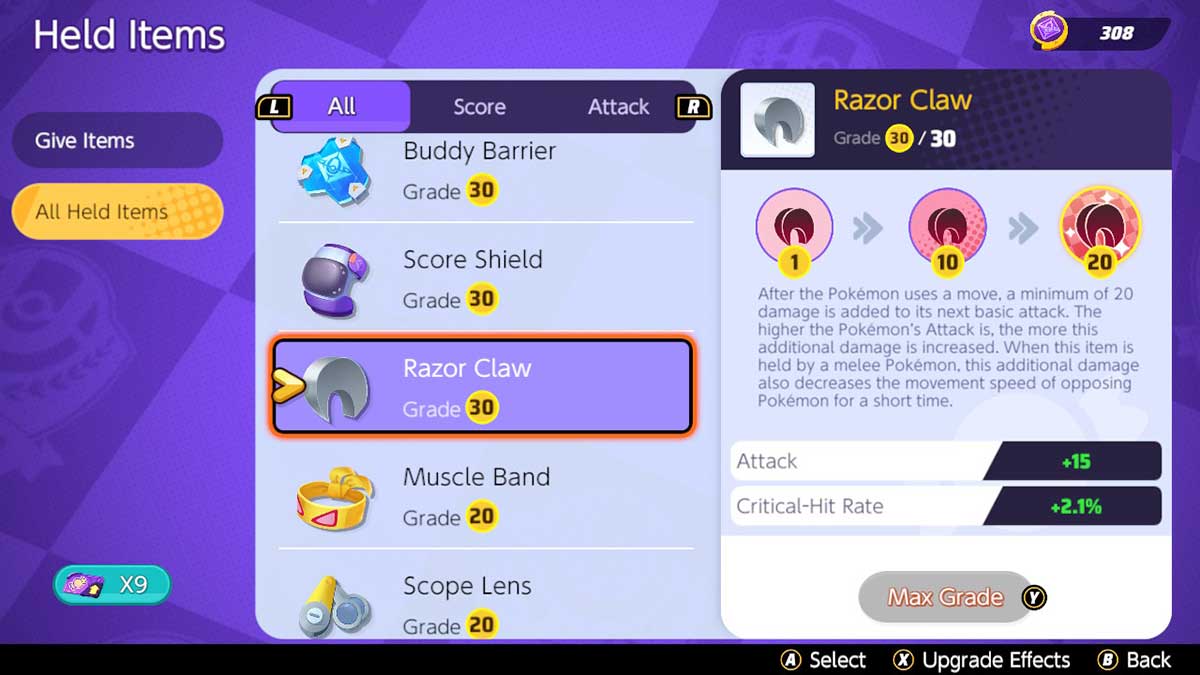 Attack weight is a more advanced item to use to increase your power and is only intended for physical attackers. Here’s how it works:

When using attack weight, you need to be confident in your ability to score. If you cannot score points during the game, that item slot is lost. If you manage to score multiple times, the attack weight can increase the power of other items you have, such as the range aim. 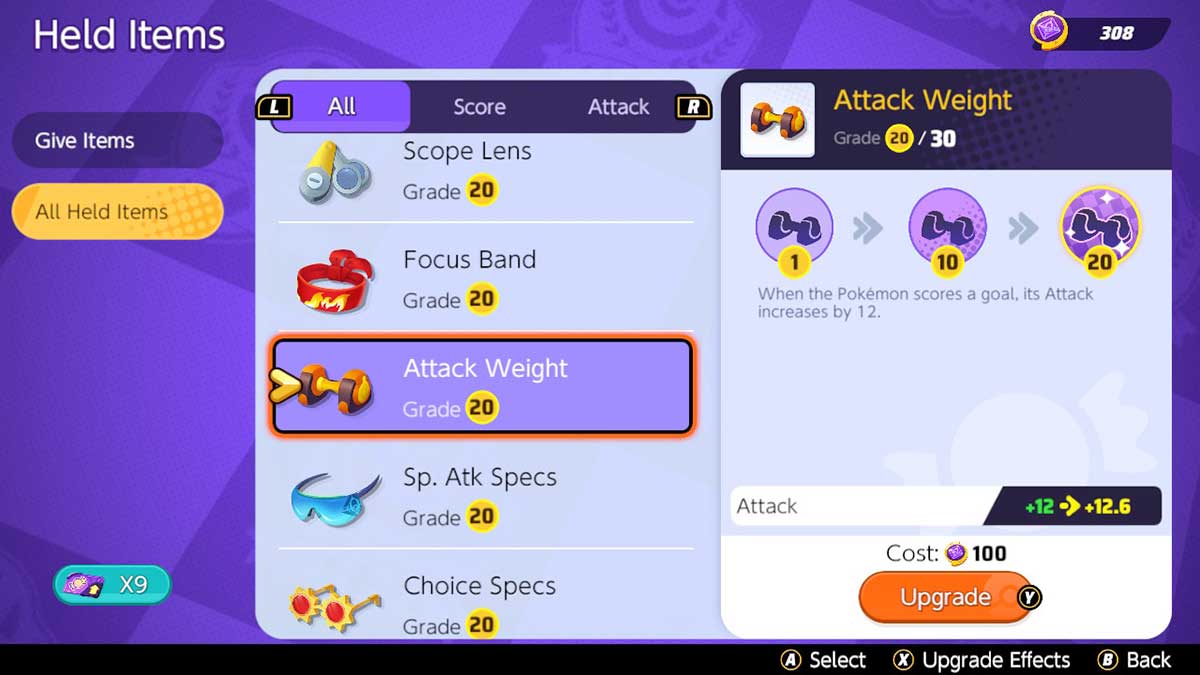 There are the items that I recommend to buy first for the jungler in Pokemon Unite. Remember to consider the abilities of the Pokemon you want to play before buying items. If you’re trying to narrow down your choices further, there’s a way to check popular versions. Simply go to the Held Items menu and press the Y button to see sample sets for the selected Pokemon.

Thanks for reading and stay tuned for more Pokemon Unite guides.