There are several methods to take a screenshot on a Windows 10 PC. In this tutorial, we will show you how to do it via a combination of keyboard keys, via the system tool intended for capturing, and finally thanks to an extension. for your browser which can capture entire pages on the web.

Windows 10 offers several ways to take a screenshot and it’s very easy either way. The keyboard shortcut option is the easiest. Your entire screen is captured, and accessible directly to the clipboard. The system also has a built-in tool that lets you manage your captures like a pro. Finally, there is a last method that applies only to your browser.

If you feel the need to capture an entire page and not just the content accessible above the waterline, you can do so with an extension. We describe all these methods below.

Windows 10: how to take a screenshot according to your needs

Under the Pc Windows, there is the well-known key PrtScn / PriScrn / Print Scr / Print system screen., depending on your keyboard, which is usually to the right of the F12 key. On some laptops, you must press the button at the same time. Fn to activate it. Basically :

Directly save a screenshot of the entire screen to a folder

This method saves time by directly saving the capture in a folder. This frees you from pasting the contents of the clipboard into Paint at first.

Use the Snapshot and Sketch Tool for more flexibility

As the tool has one annoying limitation though: it doesn’t capture the tooltips that appear when you hover your mouse over it. If this is a problem you will have to use another method. Accessing and using the capture tool is very easy:

There are a few third party programs for taking screenshots with some advanced features. In general, what really motivates moving towards a third-party solution is when you realize how difficult it is to faithfully capture the rendering of an entire web page when it crosses the waterline at the screen. There is a 100% free solution to just do this.

It is in fact a very silly extension for your internet browser (Chrome or Firefox), named FireShot. The extension adds a very useful button to your browser which offers a drop-down menu with very precise capture options: capture of the whole page, of a portion, but also video capture of the page. The extension also offers a handy editor to edit your captures on the fly before sending it. 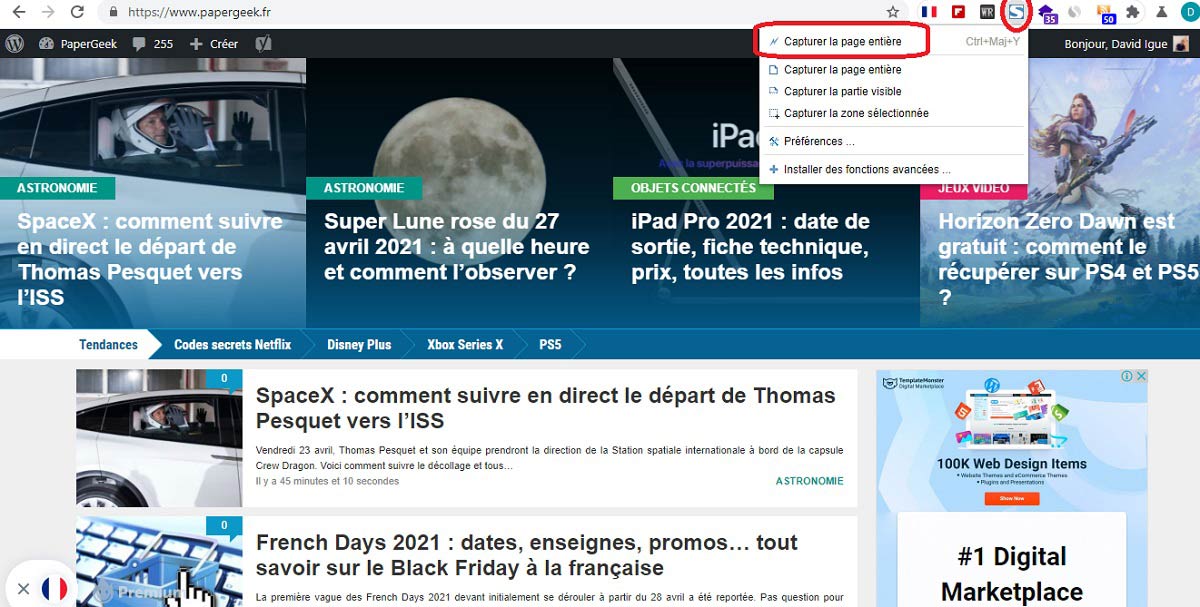 We have just seen all the options for taking a screenshot on Windows 10. If you are at Apple, here is how to take screenshots on iPhone and on Mac. Finally, find out in this article the methods to take a screenshot on Android. The builders all converge on a universal method. A few years ago, they varied enormously from one brand to another.