How to earn maximum rewards in SWGOH Galactic Conquest

Galactic Conquest is the new Star Wars: Galaxy of Heroes game mode that takes holotables by storm. Galactic Conquest appears to be a major success for SWGoH, and players finally have the full PvE game mode they’ve been asking for. In this guide we will see how to earn the most rewards by SWGoH Galactic conquest.

Galactic Conquest presents itself as a spider web that allows players to travel from node to node, progressing to the boss fight at the end of the sector. There are multiple paths to the same destination, so pick fights you know you can win.

Get in the habit of checking two boxes in front of you to find the path of least resistance. If you see any nodes with a Phoenix or Ewok squad, you can try taking them out with a beefy Enfys nest. If you find a few nodes with Nightsisters and Rebels, maybe it’s time to free your team of Emperor Palpatine.

This new mechanic grants data discs to players as they progress through Galactic Conquest. As long as they are equipped, data disks do not expire, so use them. Each data disc offers players a unique boon to each team, stacking with other data discs. Some data drives take up more data capacity than others, so try to figure out where you will gain the most value from the bonuses.

If you have a list leaning on the dark side, try to accumulate data discs that reward weakened enemies by dealing more damage. If you have a strong defensive roster filled with Galactic Republic and Jedi teams, try equipping Data Discs that grant more health, protection, and tenacity. To be clear, how you use data disks to progress in galactic conquests comes down to a theory creation that depends on your knowledge of SWGoH.

Stamina is a massive new gameplay mechanic that prevents you from launching Galactic Conquest with a single team. Your characters will lose 10% stamina after each battle, which will result in a loss of stats if you decide to use them again. It’s likely that you can progress with low stamina using a team from Galactic Legends, but this will end up being heavily disrupted by the stamina penalty.

You can passively recover stamina, or you can use a consumable to instantly regain a percentage of your stamina. There is no shame in spending Conquest Credits on Stamina Boosters for those core teams that can bring you back to victory.

While this is about planning ahead, finding teams goes beyond knowing counters for teams. Galactic Conquest took modifiers from Galactic Challenges and added them to enemies. This means that while you can normally easily counter a Rebel team with Emperor Palpatine, they can have a modifier that allows them to attack again 100% of the time when critical, potentially leading to an endless loop of attacks that destroy you before you do. take a ride.

Just because your team could regularly counter another team doesn’t mean that it makes them a slam dunk with these in-game modifiers. You may need to lean on your stronger teams higher up your roster. It would suck to lose the opportunity to earn as many Keycards as possible because you haven’t done your research.

SWGoH nailed it down by preventing currency hoarding in Galactic Conquest by capping credits at 3,500, so spend them generously. SWGoH Rewards players for spending their Galactic Credits either by helping them equip their roster of fantastic gear, or by using Galactic Credits to purchase consumables that advance them further in this game mode.

Each sector of the galactic conquest has feats to accomplish. These feats can range from granting buffs to allies to off-turn attack a number of times. Keycard rewards are huge to level you up and earn heavier rewards crates at the end of the event. Don’t sleep on these feats and try to come back to them when you’ve completed each sector. 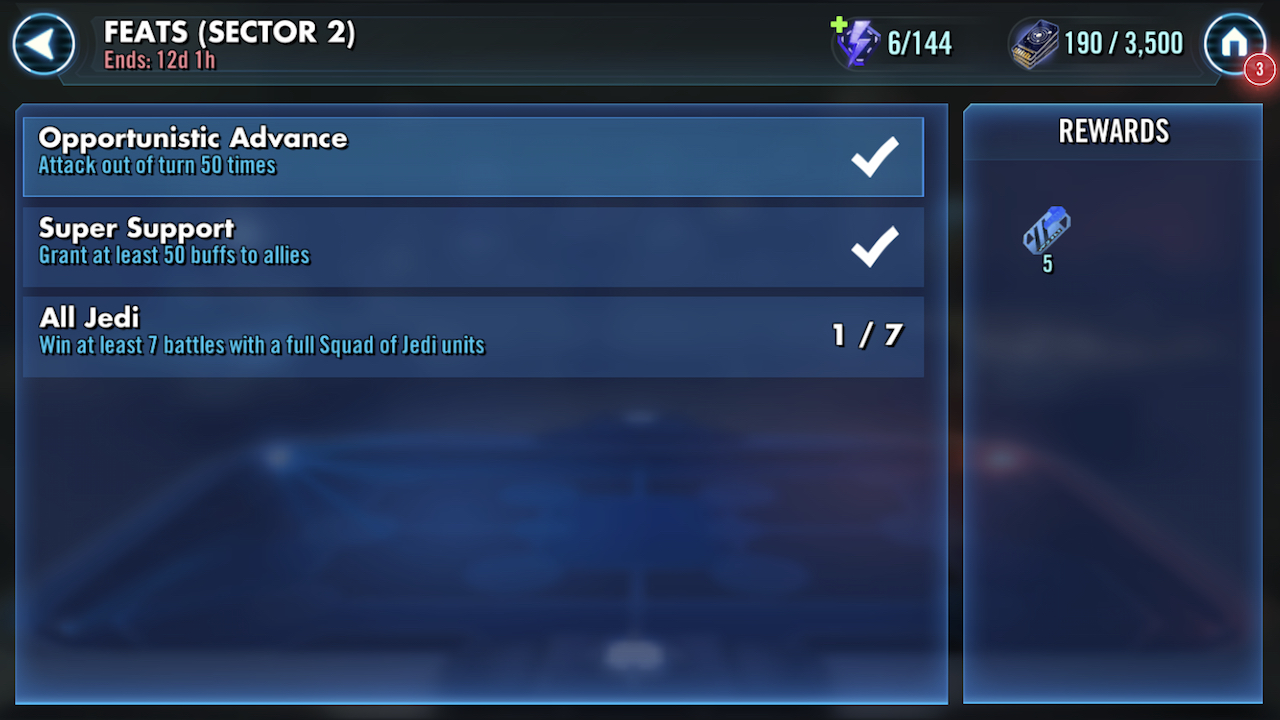 Galactic Conquest lasts two weeks. You have enough time to redo the missions you breathed and collect the Conquest Key Cards left behind. These key cards are what unlocks the main rewards at the end of the Galactic Conquest, so try to maximize those rewards while you can.

If you’ve completed all of the sectors in the abilities on your roster, go back and take your best teams to the 3/3 Conquest Keycards. Modify your team and adjust your data disks if necessary. Chances are you have some characters equipped by this point as well.

These are not the Grand Arena Championships. One mistake won’t ruin the rest of the event for you. Enter with a level head and have fun. This is the opportunity to test, theorize and enjoy the PvE experience. The stakes are low and the knots are replayable, so there is no pressure here to have a perfect run in every battle. We are confident that Galactic Conquest will be the gift that keeps on giving SWGoH.